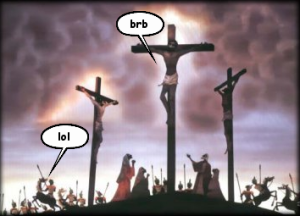 If Jesus was god, then the crucifixion was not a sacrifice.

If Jesus was not god, then it was a sacrifice, but it has no ultimate significance beyond being one of thousands of possibly inspiring stories of others who have died for various reasons, both noble and otherwise.

Now, the position of many Christians is that Jesus was wholly God, wholly human. This is nonsensical, and you know it. I am aware that this is one of the central tenants of the vast majority of Christian theologies, but it is absurd. Trying to justify this in your mind, reveling in the mystery of it, is indicative of something awry. It is to rationalize something absurd, mysterious, and impossible and call it a miracle.

But even if it were to be somehow true, then there are still some questions I have. Did Jesus know he was God (as well as human)?

If he did know he was god, then did he have all of the knowledge of god? If he did, then he knew that he would die on the cross–incarnated knowing so, in fact–and did nothing to stop it. He knew he couldn’t actually die, and that the crucifixion would be only symbolic, so how was it a sacrifice? This seems no different than me playing some online game and sacrificing my character in order to allow the rest of the team win the mission (not that I know anything about such thing…).

And if he didn’t have all the knowledge of god (or his divine powers for that matter!), then how could he be wholly god? Sure, he might have been human in body but having the spirit of god mixed in there, but without all the knowledge then there is something of god missing, right? Perhaps God is holographic, and even a part contains the whole? I’m confused….

Now, if Jesus was just a guy, granted one that was possibly sanctioned and chosen by the real god as a messenger, then it was a sacrifice. But how is it a sacrifice for us? How does a person dying two thousand years ago effect me in any other way than symbolically? And even as a symbol, how does it provide salvation? Further, salvation from what? (i’ll deal with that tomorrow).

And if Jesus was just god, and not human at all (as some early Gnostic sects thought), then his death was not a death at all. Then it was not a sacrifice at all. There is no passion to the narrative, just symbolism. Symbolism that god chose. But why choose that symbol? It seems to be a result of people who were used to the concept of sacrifice as a means to atone, like in the Old Testament laws about animal sacrifice and the smell of burnt offerings that are so pleasing to the lord. Man, Yahweh must love barbecues. But this neolithic idea should sound absurd to you.

I honestly do not see the significance of this supposedly historical event. I do not understand how God sacrificing either an innocent person or himself (to himself, to make up for a rule he made due to a Fall that he orchestrated, mind you) is significant to me at all, even if it were true. If I can see past this BS, I’m sure any real god could too. This sounds like iron age mythology to me, no different than the other myths and fairy tales of human history.

I'll leave you with this… 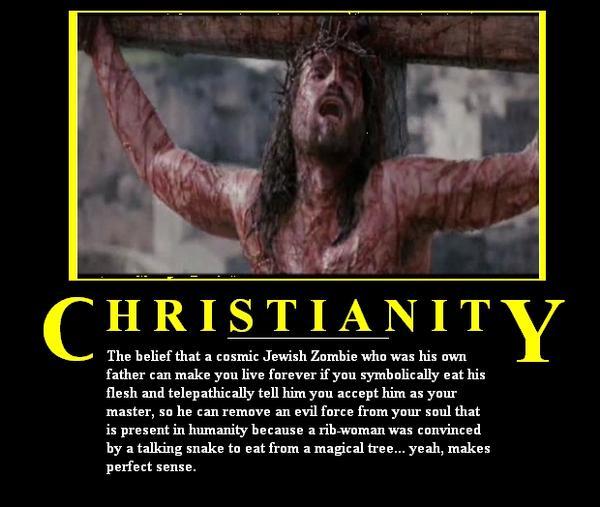 32 thoughts on “Was the crucifixion of Jesus a sacrifice?”