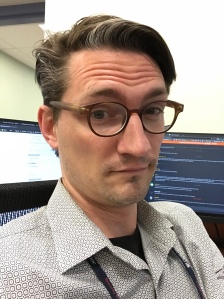 I was born and raised in Philadelphia. I attended a Quaker school (Friends Select School) for 13 years before moving on to college (BA ‘Religious Anthropology’) and later graduate school (MA Philosophy). I work at Penn Medicine, as a Systems Administrator, and I live in West Philly. I like to cook, drink good ale (especially Belgian), and I am known to walk around Philadelphia when it’s warm. I’m a progressive atheist who is not impressed with your mythology, whether or not it still has temples, churches, etc where you still talk to your imaginary friend(s).

I have previously been associated with some organizations in the Philadelphia area. I was previously board member of the Freethought Society, have previously been associated with the Rational Response Squad, but recent rifts and infighting in those communities has compelled me to largely leave atheist/skeptic activism behind, even if there are still many excellent resources in those communities (e.g. The Puzzle in a Thunderstorm people, for example)

For many years, this blog was my outlet to talk about being polyamorous, from an skeptical atheist’s point of view, in a world still stymied by conservative and traditional ideas about love and sex. And while I’ve left the polyamorous community for similar reasons that I left the atheist community behind, I’m still very much in favor of the polyamorous lifestyle, and am willing to advocate for it in our culture, whether I am actively practicing such a lifestyle myself.