Back in 2000, when George W. (“Dubya”) Bush was “elected” President, there was a lot of concern from the Left, and there were a lot of protests. Al Gore had received more overall votes. The shenanigans in Florida which led to some confusion about how the voting cards worked might have been a deciding factor in the electoral college. In the end, Bush II became president, and many of us who saw him as an idiot were afraid for the future of our country.

We, naively, thought that was about as bad as it could get in our democracy.

I was also concerned, and started attending some meetings of some groups who were protesting the election, but more importantly this was around the time I discovered the atheist community. It was January of 2002 (so right after 9/11), when I was starting classes at West Chester University (MA program in philosophy, where I graduated in 2003), where I first met people such as Margaret Downey, Staks Rosch, and other allies in the atheist community that would eventually become friends.

You see, for us at the time, the major concern was religious conservatism in politics. We were genuinely worried about the separation of church and state, women’s rights as they were affected by such incursions, and the close relationship between religion and the military (my article about Battle Cry will provide some context for this).

This was long before the arguments about Social Justice Warriors and MRAs. While those issues were being discussed, they had not hit mainstream media yet. At best, they were mocked in such outlets as the movie PCU (from 1994), but were not part of the larger political conversation. 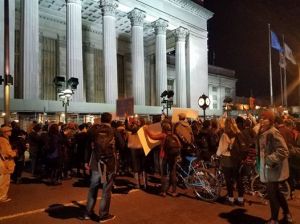 With my experience marching through the streets of Philadelphia last night, protesting the election of Donald Trump, I believe that has changed. This election, in retrospect, is more about social justice than any previous election. Yes, those issues are always relevant, and they matters in 2000, but with our president-elect being a misogynistic, racist, lying sexual abuser and con-man (among other things), all of the things that we have been arguing about on social media over the last few years are now on display in the split for who we voted for in this election.

It seems clear that those who either support, or are indifferent to, racism, misogyny, sexual assault, etc exist in large enough numbers to elect a man who represents all of them. because whether there is room for blame in the DNC, Hillary’s own faults, and those who didn’t come out to vote, the simple fact that people actually voted for this man, this narcissistic man-child (and don’t I have some experience with such people…), is the fundamental problem.

Yes, the DNC has some major work to do, if it wants to survive. Yes, Hillary Clinton was flawed in many ways. Yes, voter apathy is disgusting and depressing. Yes, there were shitty third party candidates who might have effected some elections. But at bottom, people actually voted for this fundamentally unprepared con-man. That’s the thing we need to be focusing on.

Last night, while marching, the message was that the rights of women, immigrants, POC, and many other marginalized groups are terrified b the implications of this election. Yes, Trump himself is awful, but what scares us most is that there are enough people who either are supportive of, complicit with, or indifferent to anything except their own sense of loss of privilege.

Because let’s not fool ourselves; the disaffected whites, all over the USA, who supported Trump are feeling ignored, irrelevant, and economically pressurized and their fear, ignorance, and hate spoke out Tuesday night. But, frankly, that’s how marginalized people have felt for decades/centuries, so I do not have much sympathy for their fear. Loss of dominance and privilege is not suffering. Such anger, Trump supporters, is what the people you have been indifferent to have had to deal with all their lives.

I, as an atheist, polyamorous, democratic socialist have experienced some small amount of marginalization. But my being white, male, cis, heterosexual, and economically comfortable (at least recently) have afforded me the ability to speak freely without fear for my life or livelihood. Demographically, I’m not all that far from the people who support Trump, and so I can see part of the anger and fear that they have. But I do not respect it, because they fail to see the larger picture.

Your fear, anger, and hate that led you to vote for a terrible candidate and terrible human being are insignificant to the fear, anger, and hate (yes, that exists too, despite our desire to use love, primarily) that you have caused by perpetuating a culture which demeans those whom don’t fit into your white, patriarchal, Christian, heterosexual, “normal” worldview.

You, Trump’s America, cannot be allowed to maintain the cultural dominance you became used to, because doing so means that those you are afraid of will have to continue to be marginalized. This election may feel like a victory to you, but to so many, it’s a source of genuine fear for people’s rights, safety, and lives.

Lastly, I saw a sign (but didn’t take a picture–d’oh!) last night from a Trump supporter which read “Trump won, move on.” So, had Hillary won, that armed revolt we were threatened with would have not happened? The last 8 years of Obama being the anti-Christ, Islamic extremist, and totalitarian overlord who would destroy America and never give up office was the conservative base moving on after he won?

Fuck that. We may have to accept 4 years of a con-man as president, but we don’t have to tolerate your continuing fear, anger, and hate making this culture awful for more generations. We will fight you, and we must win because what is at stake is people’s survival, while you are only fighting for your comfort.