Today has been, to put it simply, a rather stupid day. I am choosing to write about it because I think often my particular brand of anxiety and other insanity can often be comical…at least when I think about it later.  It’s terrible when it’s happening, but I think I would be dead by now if I couldn’t laugh at myself.

I have recently become hyper aware of how often I get depressed or anxious for no particular reason.  In the past there has been little lag between “bad feeling in the pit of my chest” (somewhere behind my xiphoid process…Not to be mixed up with Zaphod Beeblebrox.  It’s the greatest term I ever learned in CPR training.  It’s the point at the end of your sternum! The thing that will stab the patient if you screw up! Which you totally will! If you are me! Most likely! Also, I wouldn’t really describe any other terms as great from training, so I’ll just say it’s a great term.  Not the greatest.  How do I always digress this fast?) to jumping to conclusions about what it is inherently depressing me.  When there’s no space between those two things, it becomes impossible to see the good things in your life.  You just either project on everyone and everything around you all the fears you have and see evidence of their validity or you remember shitty things from the past and get upset about them all over again.  This is a terrible habit to get into and part of my healing process lately has been to extend that gap and to try and accept more easily that I am feeling lousy for no real reason (although, I would venture to guess that it is purely physical, like a hormonal imbalance or dehydration or blood sugar levels).  My goal as of late has been to accept that sometimes I’m a mess.  It’s been worse lately.  Who knows why?  I stressed myself out a lot last month and maybe I’m still balancing out from that.  Anyway, I tell you all this because last night I really noticed it and I also noticed that my swings back to laughing a lot are also harder to predict.  Once I allow myself to just say, “You’re a mess right now, Gina”, it’s easier to laugh at stupid crap.

Scene One: This morning I did Jessie a favor by dropping something off for her at her doctor in the Northeast.  I figured this made a lot of sense.  Wes didn’t feel comfortable driving with his pirate patch worthy eye and my office is actually oddly close to that part of Philadelphia.  I gave myself an hour to get there and then to work.  This seemed completely reasonable, but I didn’t calculate for the oddness of Northeaster streets and the surprise attacks of the GPS. “Keep going…keep going…NOW TURN RIGHT! NOW NOW NOW! Oh…you missed it.  What a dumbass.  RECALCULATING.  RECALCULATING AGAIN. Dumbass.”  Perhaps I’m projecting how much my GPS berates me when I fail to follow it, but I figure this is how Skynet really prevails.  The machines won’t kill us with laser blasters.  They’ll just be passive aggressive and make us feel bad about ourselves.

Perhaps I just think that because I’m insecure and anything can make me feel that way.  Whatever.  STOP JUDGING ME, CELLPHONE.

Anyway, after taking yet another wrong turn, I lost it in the most functional way possible at the time.  I was fully capable of driving, but I could only do so for a second if I did a death metal drum solo on the steering wheel and screamed at the top of my lungs.  Nothing coherent, just the kind of primal scream that Tears for Fears is always going on about.  Then I had “Shout” stuck in my head and yelled, “Fuck you, Roosevelt Boulevard!”  Finally I managed my errand and was on the road to New Jersey.  And as I crossed the treacherous arch that is the Tacony-Palmyra Bridge, Bruce Springsteen lulled me down from assuming that any minute my car would spiral off into the Delaware (not from a suicidal sense.  Don’t worry.  I just envisioned a scene where my car was plummeting towards the murky depths of the river and I would think, “Well, isn’t this just fucking great.  How am I supposed to get to work NOW? Fuck you, Bridge! Why won’t you send your water trolls to save me? Hmm???” or, more realistically, I would think, “SHHHHHHHHHIIIIIIiiiiiiitttttt…” kersplash!), and I was simply a little bit crazed.  OK, I was not actually listening to the Boss, but it’s just sort of in the air, OK?  For all I know, Nickelback was playing and I simply repressed the memory.

I get to work and find my email inbox full of bullshit and my voicemail in a similar state.  I started freaking out again.  I tried to extend that gap between the physical emotion and the justification.  It was hard.  I didn’t know what to do.  I was sobbing at my desk and talking to Wes and Shaun on gchat, saying that I really think there’ something wrong with me.  Then Shaun said, “otters”.  I decided that cute animal pictures were probably my best bet at achieving functionality again.  Wes agreed that this was a very good plan…and it was.  It was an instant fix! What the hell?  Why has no one written their dissertation on this?  And so, due to this photo, I was again able to work:

Scene Two: The other day I wrote an email asking for help from someone.  I spent a long time on the email.  I chose my words and punctuation very carefully, so as to avoid any misinterpretations of tone.  I did not use any emoticons.  Clearly this was my mistake.

I was then informed  that the person I wrote the email to is being vindictive because my email accused him of being inept. 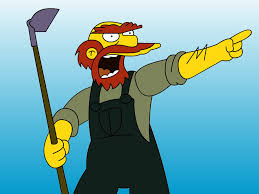 This was so far from the truth that, if I were in a more stable state of mind, I would have had to laugh and say all kinds of snarky things.  But by then the great healing powers of otters had worn off and I was unable to keep calm about it.  There is a historic reason in this particular case.  Namely, the culture of my life before seemed to encourage people to not express their issues directly with the people causing the issues, but rather to gossip to others and allow it to trickle back to the “guilty” party.  By then, it has festered and doing anything about it probably means a big, stupid confrontation.

Upon hearing this, I hit my desk, stood up fiercely and yelled, “Fuck no! This is NOT how we do things, god damn it!”  I stormed out to find the person who had a passive aggressive beef with me, making sure to calm the hell down before talking to them, and then talked to them directly about the situation.

Yes, yes, that whole direct communication thing again.  Gets me in trouble every time…apparently.  Yeah, fuck you.

After having a polite (meaning not laden with curse words and personal insults) conversation with the person, I left and stormed back.  I wandered around aimlessly, unable to focus through my extreme aggravation.  Then someone asked me about it and oh how the curse words flew.

I then looked at otters again and all was eventually well.

Scene Three: I went to the snack machine and purchased a bag of Fritos and a pack of TastyKake Butterscotch Krimpets, convincing myself that this passes as a lunch.  I had some Excedrin as an appetizer.

Scene Four: By 3:30pm, it was clear that the day was a wash.  I decided to clean up my desk and figure out how I was going to be productive next week.  Sometimes you just have to throw in the towel.  After doing this, I was chatting with Kelly who sent me this amazing rant against an anti-gay politician from Minnesota Viking Chris Kluwe.  I was so entertained by it and Kelly said that she might have a crush on him based on the usage of the words “lustful cock-monster” alone.   We had the following conversation:

me:  This is pretty fabulous.  He wrote “holy fucking shitballs” to a politician!

me:  “the Russian judge gives you a 10 for ‘beautiful oppressionism”

Kelly:  I know!  He’s intelligent, brazen, pretty funny, and on the right side of this debate!  I’ve never even seen him, and I think I have a crush.  lol

Kelly:  Oh, he’s from Philly! And one day older than me.

me:  He’s pretty hot. I don’t know if I would think that without the impressive letter, but whatever

Kelly:  haha. I wouldn’t. I think he is rather average looking

me:  Ha, he reminds me of Christian Bale

Kelly:  But he certainly is hotter after the letter! He reminds me of someone I know, but I can’t put my finger on it

me:  He might be Christian Bale in this photo.

Kelly:  hahaha. If there is anything I NEVER thought would happen is you and I discussing the hotness of an NFL player.  Lol!

me:  Ha! Agreed. But it was because he wrote a sweet letter about an anti-gay fucktard.

Kelly:  which was overtly condescending and used an awesome array of curse word delicacies.

me:  Also, I like how much it talks about civil rights and is written by a privileged white guy.

Kelly:  Yes, absolutely.  The swearing wouldn’t have had any effect if there wasn’t intelligence behind it.

Anyway, there’s my nutso day in four acts.  I don’t really have a grand point to make here except to say that this is what most of my days are like.  I can’t imagine what it’s like for people with completely unmanageable problems.  There are days when I barely function at work.  My brain just craps out after too much stress and I have the ability to calm down on my own (most of the time).  How do other people do this?

My therapy appointment is about a week away and I keep oscillating between being terrified that this just won’t help me and thinking it’s the best decision I’ve made in a long time.  But most of my days are pretty sinusoidal, so this should come of no surprise to me.

View all posts by Gina