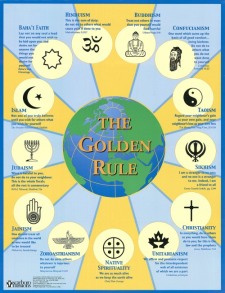 The Golden Rule, with its various incarnations, permeates religious thought.  And while it can be formulated in many ways, the most common way to express it essentially states that you should treat others as you would want to be treated.  It emits an attempt at fairness in action, making sure that one does not make a double-standard  by making exceptions for yourself that you don’t allow for others.

Fair enough.  And while I think that the Golden Rule is best said when it attempts to treat others as they wish to be treated, due to the fact that what I want is not necessarily what others want, I think that this is often problematic because we do not know what others want.  We could ask what people want, I suppose, but the practical application of this is insurmountable on a societal scale.

I think that the general idea is to act such that those actions create a world that is consistent with our desires, while keeping in mind the desires of others and their ideal worlds.   Thus, as a general rule, to act in such a way that would be consistent with a desired world which is created by those types of actions is a good place to start. Figuring out an ideal world that we can all agree on is probably the biggest problem.

And so what do we, the new atheists, do? (And yes, I still dislike the term).  Our criticisms are not always appreciated by other people, especially strongly religious ones.  We try to speak out in order to be able to gain acceptance in culture, to stop theocratic intrusions into government policies,  and to make sure that theology stays away from science so that we can continue the process of understanding unimpeded by silly mythology (i.e. creationism) and other superstitions.

Not all atheists are skeptics, nor are all skeptics atheists.  I agree with people such as Matt Dillahunty, that to be a skeptic should lead a person to be an atheist.  Why? Because I don’t think there is any evidence to believe in any gods, and without evidence in such things, one has no cause for a belief in any gods.  Thus to be skeptical concerning the question of gods, without sufficient evidence to believe in them, must lead to atheism as the only reasonable conclusion.  As soon as there is evidence, then a skeptic has to address that evidence.  But there is no good evidence that I know of, and I have been looking.

Skeptics, at least “real skeptics” (I’m being playful, not trying to drag in a “true Scotsman”), encourage criticism of all kinds of beliefs.  Skeptics are all about the evidence, use of rationality to address that evidence, and accepting as true what the evidence points to.

As an implication of this, I think that skepticism would desire a world where open debate, conversation, and challenges to beliefs would be encouraged.  A world where all of the data is explored, all sacred cows inspected, and people are encouraged to have a real desire to know what is true and not just what is preferable or easy.  This is antithetical to faith, by definition, and is what the current public atheism is all about, at least concerning the questions of religion, gods, and faith.  The criticisms of religion are ancient, in many cases.  These ideas being promulgated is what is new, and religious people are not used to hearing these ideas.

Another, hopefully obvious, implication of being a skeptic is that a person should be open to have their own beliefs challenged.  Thus, when the superlatively respected skeptic James Randi wrote this piece the other day about Global Warming, he was appropriately challenged by various people in the skeptical and atheist community.   And while his point may be valid (or not), he is willing to accept the criticism and respond to them, rather than claim persecution as many Christians often do when criticized in the same way.  I would think that Randi  encourages the challenges in general, even if he may not have liked some of them specifically (As his follow-up seems to imply).  The bottom line is that when skeptics make claims, hold beliefs, or sign on to something, they should be willing to accept criticism when it comes their way.

These implications are an essential part of a skeptical worldview.  It is how we want to live, the kind of world we want to live in, and how we think one should act with other people.

Therefore, when the new atheists, insofar as they are also skeptics (and many of the leading atheist speakers and writers at least attempt skepticism), offer public criticism of religion, faith, etc, they are following the rule of treating others as they want to be treated.  They are acting in such a way that is consistent with creating a desired world that the actions they make will create.

I want a world where people’s beliefs are challenged when such criticism is warranted.  I want a world that is not simply based upon faith, but rather evidence, reason, and an attitude of curiosity.  I want to help create an environment where skeptical inquiry is supported by people rather than blind (or at least partially obscured) faith.  And I know that many of my fellow atheists share this desire, and so we are simply following what we think the right thing to do is, according to the very “Golden” rule that religions share.

So, if there is a problem with the actions of atheists these days, then the problem is with the rule itself, not with our actions.

But wait, didn’t I say that I liked the other formulation of the Golden Rule better?

I said, above, that I prefer the idea that one should treat others as they want to be treated, and not merely as how I want to be treated myself.  I said that the issue was that I didn’t know how others wanted to be treated all of the time, creating a practical problem with implementing the idea, not a problem with the idea itself.  I also stated that this will lead to inevitable conflicts of opinion about what kind of world we want to live in.

We know that many religious people tell atheists that they do not want us speaking out.  They don’t want our billboards, our books, or in many cases they don’t even want us (to exist).   Now, if they are willing to lay down their arms, then they might have a point.  And many religious groups do not proselytize, advertise, or otherwise bother the public.  But the simple fact is that religion is part of pur culture and public life, and so to demand that atheists keep quiet is a double standard, violating the very essence of the Golden Rule itself.  We have as much of a right to speak publicly about our lack of beliefs (as well as whatever actual beliefs we hold in addition to that lack) as theists do.  It does not even matter if the United States were a Christian nation (which it is not), because that would not take away our freedom of speech, freedom of conscience, and freedom of opinion.

To simply capitulate to some religious people’s desires to not have us vocal, they further create a double standard when they don’t treat us as we want to be treated; to be allowed to speak publicly if we want to.  The result is the collapse of the rule.  They want to be left alone by us, we want to have a dialogue in the public square where they are, and both cannot be attained.  Some compromise must be reached.

Atheists do not, and should not, disrupt private worship.  Atheists do not, and should not, take god away from people’s lives, mostly because we could not possibly do so anyway.   And despite the mythology by many in the religious community, we are not taking their god out of the public square or schools.  We are only arguing and working towards government neutrality concerning religious ideas.  The government should be secular (which is not the same as atheistic).  Do what you want privately, just don’t expect the government or it employees to condone or lead those activities.

And, of course, most do except these rules, even if they do so unhappily.  That’s fine, because here we have the right to pursue happiness, not necessarily to be happy.

I am doing unto others what I would want done unto me.  The believers who want us to shut up are just protecting their beliefs from scrutiny.  Those faitheists who say I should not criticize are not following this Golden Rule, violating it because they don’t want their own beliefs, the idea that people should not criticize certain things, to be criticized .  They might see some hurt feelings if we keep this up while making them look bad, while hiding beneath our shadow, to the rest of our culture.

No.  They are doing a good job of looking bad without our help.

7 thoughts on “New Atheists, Skepticism, and the Golden Rule”