More specifically, I want to address an idea that has taken root in the Tea Party.  It is probably not universal among them, nor do I expect it to be the most important aspect of the Tea Party movement.  However, when I ran into a rally at Independence Mall, near Independence Hall, on Independence Day, it was a theme that was mentioned more than a few times, especially by Presidential hopeful Herman Cain, who spoke among others.  The key note speaker was John Bolton, who has no chance as a candidate, and whose speech I found silly and uninspiring. 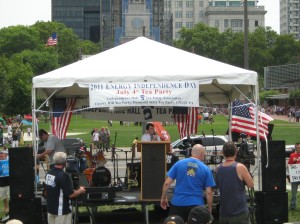 It seems as if one of the problems that the Tea Party is trying to combat is the ‘liberal’ desire to change America.  This was said in context of the “ripping up of the Constitution” (supposedly by people like me).  Herman Cain said several times that there are people who want to change America, and many said that this is the greatest country in the world.  Perhaps.

So, what is wrong with changing America? And why is ripping up the Constitution associated with this, as if one could not change America and follow the Constritution?  Best nation? In what way; culturally, economically, politically, or some other way?

And yes, I do want America to change.  I would like to be part of what changes it, as well.  But I do not want to rip up, either literally or metaphorically, the US Constitution.  I have read the Constitution and  appreciate my rights as well as defend the rights of others even if I disagree with them. Further, my understanding of the process by which we create Constitutional amendments implies that change is an inherent part of our Constitution and therefore our country.  It just seems that this idea is empty rhetoric without real substance.

Despite the empty rhetoric of many of the speakers and apologists I heard from there yesterday, I (as a liberal, at least in most political senses), am not trying to destroy our Constitution.  I am trying to use my constitutional rights to influence the public towards a better America, by use of speech, protest, and litigation in some cases.  Our nation is ripe with cultural problems from sex negativity, poor education, and political naivete which helps cripple our growth to a better nation and a better world.

I want citizens who are more educated, mature, and willing to challenge their own worldviews.  I want the legality of gay marriage and polyamorous marriage.  I want better healthcare, whether through a single-payer system or some other option.  I want the divide between the rich and the poor to be addressed in a meaningful way.  I want discrimination, breaches in the wall between government and religion, and other effects of poor education and indoctrination to disappear.  All of these goals, and many others, can only be reached by changing America.

The idea that we should not change America is conservative by definition.  And as one conservative-minded person I know told me, there is a difference between wanting to retain traditional ideas per se and simply opposing progressive ideals.  Granted.   However, whether you want to conserve traditional ideas per se or not is not the point.  The point is that our culture, and therefore many governmental policies, need to change if we are going to improve.  Arguing that America should not change sounds a lot like a person telling there therapist that they don’t need help.

In other words, this ideal within at least some Tea Partiers that we should not change, and we should fight change, is a sign of denial of real problems within.  We, as a culture and as a nation, are sick in many ways.   We need to change, if we want to survive and thrive.  Right now, we are not thriving, and more of the same will not help.

Finally, concerning what one Ron Paul supporter told me, which was that the Tea Party movement was started in 2007 to protest the corporate ownership of the two major parties, and that it is trying to remain independent from such influences.  But the recent motions of people associating with the Tea Party, such as Sarah Palin, have taken the name brand and changed it.  My prediction is that what remnants of the Ron Paul revolution that want to stray from corporate interests will die out completely, having been over-taken by the interests of those who have the money to make more noise.  And while I don’t support Ron Paul, I appreciate the attempt by some of his supporters  to remain unaffected by corporate interests.

I just don’t believe that changing (or restoring, as they call it) our government will make the corruption disappear.  I’m too much of a cynic, I suppose.

So, yes, Tea Party leaders, some of us do want to change America.  The fact that you don’t see anything worth changing is one of the many reasons I cannot get behind your cause.