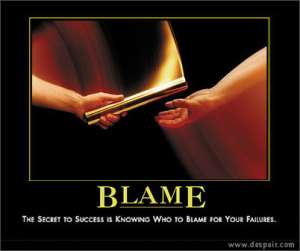 Many of us in the atheist and skeptical community have noticed this trend within many people.  It is certainly not unique to religious people nor is it ubiquitous within religious groups, but this particular force is quite strong with many believers.  It is projection, and it is a form of insecurity and lack of self awareness.

How does it work? Well, it is quite simple, actually.  Have you ever met a guy who is just a little too homophobic?  You know, the guy who even at the slightest accidental touch or slightly long eye-contact from another guy provokes some comment such as “hey, what are you a queer or something?”In other words, the reaction is to call the other person a homosexual.  Why would they do this? Now, in some cases it might just be because they are an ass, but it seems to me that in some cases this is the fear of their own homosexual feelings.  Perhaps they are bisexual, even if only a little.  Perhaps those impulses scare them because they don’t want to be teased by other people like them.

Thinking about it again, the better example is people like Mark Sanford, who promoted family values all the while involved in his own sex scandals. But theists can do the same type of thing.  A common example of this that I see is the accusations that certain people make of atheists.  We want to live a life of sin and so we ignore god’s rules.  We are ignorant and don’t know or want to know the truth.  There are other examples as well, but these should be sufficient for now.

How are these accusations projections? Well, maybe sometimes they aren’t.  But I have talked with people and have found that replies to atheists by theists come in this form when the theist is in denial about their own actions and thus hoists them onto their interlocutor.

Many Christian men come to their faith while young and after dealing with some issue; whether it be alcohol abuse, womanizing, excessive pornography use, etc.  I saw this in college and graduate school multiple times, and have heard similar stories from many people before and since.  In many cases it’s more than one thing, and they find, within the messages of Christianity, a way to be saved from these problems.  But their desire does not go away.  They still want to look at porn, drink, and have some casual sex but they have turned the corner and are living a life under their idea of god, changed (they claim) by their rebirth.

They have the problem that they are struggling with, and I sympathize with this because we all have issues we deal with as we try and improve ourselves.  They were using people or overdoing something they liked to do and went as far as to see the whole activity as wrong, rather than its misuse or excess as being the problem.  Instead of reading the Bible, perhaps they should have read Aristotle’s Nichomachean Ethics; as what they need is moderation, not prohibition.

The other reply I get frequently is sometimes more damning; ‘you atheists are irrational’ or ‘atheists are just afraid of the truth’ or something like that.  When I talk to them, I find that it is them that is ignorant and afraid of the truth.  They don’t know the history of their religion, its theology, nor have they read all of their scriptures.  They think I’m avoiding god but it is them who is over-focusing on god; they are missing other points of view because they have swapped one addiction (whether it be sex, porn, alcohol, etc) for another (god).

Especially if their theology has them reject evolution or the so-called big-bang theory, they almost never don’t understand the basic theories let alone the scientific method.  And when you bring these things up, you see fear, insecurity, and anger in them as you are picking apart the edifice of their reborn self.

And then what happens? They project that fear and anger onto us, and then we become the angry atheists of contemporary lore.  This, in my opinion, is the most common form of projection.  My passion for the subject, my confidence in tone in presenting my view,  causes fear, insecurity, and thus anger in those who are not so confident and they project their emotion onto me.

There is a lot of insecurity and fear within religious communities about their beliefs, especially the more fundamentalist groups.  And I will not deny that there are some angry and insecure atheists, as I know a few of them.  I am insecure in some ways myself, but not when it comes to my lacking belief in any gods.  In this I’m pretty sure and secure, and my breadth  of knowledge on the topic of religion began as an honest attempt to evaluate religion and led me to remain skeptical of religious claims.  I’ve not been convinced, am open to be convinced, and no matter how often I say this I still get comments that say that I’m claiming that god does not exist and I’m being dogmatic.

I’m sorry, but it is most theists who claim that god does exist and are dogmatic.  Stop projecting your behavior onto me.

Stop allowing your fears and insecurities to govern your behavior.  Recognize them as part of what you have to deal with, become conscious of how what scares you motivates you to not see things within yourself.

Finally, am I projecting? Possibly a little.  But I think that this is a common human psychological behavior pattern, and I do see it frequently.  I have had some Christians I’ve talked to admit that they are insecure, sometimes, about their beliefs and they think that others, including atheists, are guilty.  And so they sometimes are.  But being aware of it is a first step in finding a solution.  If we want to continue a mature and informed dialogue about these issues, everyone, including atheists, needs to be aware of how we use projection to tear down the other rather than admit our own flaws.

We all need to inspect the logs in our eyes before attending to the splinter in others’ eyes.